It’s been nine days since I have tended to my blog.  I never planned to let it go, but I did.  I missed a day because traveling in Afghanistan can suck, then another day because incompetent, lazy people & traveling in Afghanistan suck even more, then I missed another day because some days I suck & then the next thing I know it has been 9 days.  I honestly have little interest in starting back up again, but I really should stick with it at least until I get back home, so I will try.

I thought doing the 10 pictures a day thing would be an incentive for me to stick with it, but it didn’t work out.  I did that for 27 days…every day for 27 days.  That is 270 (plus a few extras) pictures.  It began to feel like work to go through my pictures, select ones that I wanted to post, resize them so they are not such space hogs, and then upload them.  It was more work than fun…why would I want to do that?  I need to find a fun distraction, not create more work stress for myself.  The thought of it was almost depressing.  It turned into an incentive to avoid the blog versus tending it.

So, what was the impetus for blog avoidance you ask?  Let me tell you a little story.

Of course before I begin that, let me tell you that I try not to be negative here or in real life…I fail…too often…but I try.  So although this tale of woe is just that, I hope to avoid too much of the self-pity, everything sucks attitude.  But of course I write without planning ahead, so things end up on paper (or computer screen as it were) as they tumble out of my brain through my fingers…let’s see if the brain stays somewhat positive.

It all began early morning on the 16th as I decided to jump a Space A flight from FOB Al Masaak for the short flight back to FOB Apache.  As I have mentioned in previous posts, getting a flight involves hours, sometimes many hours, sitting on the HLZ waiting for the helicopter to arrive. Then hoping there will be room available going in the direction you want to go.  I am an inpatient person, so waiting tends to get under my skin, but I have come to realize that getting irritated only makes it worse.  So I do my best to just let it go & read a book or a magazine.

There I am shortly after sunrise, settled into a spot on the rocks, with a sliver of shade overhead, propping myself against my rucksack, reading a Vince Flynn novel and began the who knows how long wait. It actually wasn’t too bad, because after less than 3 hours of waiting I found myself on a helicopter heading south.  Unfortunately the 30 minute ride turned into a nearly 2 hour trip as we bounced around from one place to another before I climbed out at Apache.

My plan was to return to Al Masaak on the 20th, where I will be living for the duration of my time in Afghanistan.  This would give me 3 solid days at Apache to pack up and organize for the move, as well as have a little down time with all the comforts that Apache affords (like home made pizza).

Well, those plans quickly evaporated as I discovered that I received a message from the Army notifying me I had a ‘bad’ ID Card & it had to be replaced before 2 Aug 12…Well that sucks, but what sucks more is it really isn’t easy to get an ID Card in Afghanistan (is anything?).  I would need to travel to KAF & still be back to Al Masaak on the 20th.  There was no way around wasting some of my Apache time on getting this task accomplished.

I called the ID card facility at KAF to find out the next available appointment was not until 10 Aug 12.  But they tell me I can come in on a walk-in basis and wait to get an ID made on a Space A basis.  They go on to explain that it is usually a 2-4 hour wait, but it can be longer, and people start lining up at 0400 because the doors open at 0600 and they only allow a limited number of Space A to sign in.  Sorry, but that doesn’t work for me.

I started making phone calls to see if there were any other options.  I could go to my Brigade HQ, but getting a flight down there and back would definitely not be an easy process & there would be little chance I would be back to Al Masaak within 4 days.  But low and behold, after a half-dozen phone calls I found a Brigade HQ at KAF that had an ID card machine & they graciously agreed to do my ID card even though I am not in their unit.  Woohoo. Things are looking up!

With that information I made the long shot plan to hop an early morning Space A from Apache to KAF (one of the benefits of Apache’s growth is the increase in number of flights), get my ID card and jump an afternoon flight from KAF, back to Apache.  I would only lose 1 day.  That isn’t too bad.

So at sunrise on the 17th, for the second day in a row, I found myself sitting on the rocks of an HLZ waiting for a flight.  After less than 45 minutes the aircraft came in, but before we loaded up they decided they would do some area runs & come back to Apache to get us KAF bound people.  It was a great plan for me because I really do not care to sit in the back of the aircraft any longer than I have to doing the FOB hop.  They said they would be back in 60 or so minutes.

I decided to take a little break from the rocks – after all, I had at least 60 minutes – and get something to drink, etc.  I was standing inside talking to people when I heard the unmistakable sounds of a Chinook coming in.  I looked at my watch; it hadn’t even been 45 minutes, that couldn’t be my ride, could it?  But I had the sinking feeling it was.  So I had to sprint to the HLZ (at least 500 meters), get my crap on, grab my ruck & get onto the aircraft.

I scrambled to do all that, and moved out to the aircraft.  The crew chief directed me to load up, but I hadn’t even taken 2 steps into the aircraft when he stopped me and once more told me they would do some local flights and come back to Apache to get the KAF passengers.  WTF, all that hurrying for nothing.

This time I decided to just wait at the HLZ & they were back within 45 minutes.  Finally we were on our way to KAF…not.  We had to stop at FOB Lagman where we packed the aircraft full with Romanians and their gear – a solid 20 minute process.  Then we lifted off to not go to KAF.  We flew a few hundred feet to the refueling point.  Which means everyone that just loaded up needs to unass the aircraft to fuel & then reload – another 20 minutes process.  Finally we headed to KAF, with just one stop. 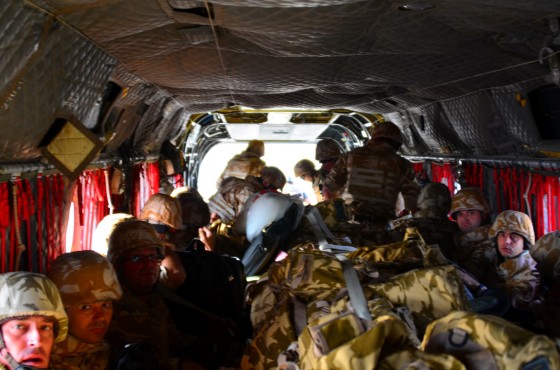 Despite all that, I was on the ground at KAF before 1000.  I checked in and was able to sign-up for a 1645 Space A flight back to Apache.  Things were really looking good.  Looks can be deceiving.

I headed straight to the nice Brigade S1 shop that agreed to help me out.  They asked me to come back in 30 minutes as the ID card clerk had just stepped out.  No problem, I didn’t need to be back to the PAX terminal until 1445.  I went to the Post Office & mailed my crappy Sigma lens back to Sigma.

After that I returned to the S1 shop & the ID card clerk tried to log into the ID card system but kept getting an error message.  She asked the warrant officer in charge for help with the same results.  They called the helpdesk (back in the States) to be informed the central system had crashed just moments before.  So I missed getting my ID card by just a few minutes…that’s not a good sign.