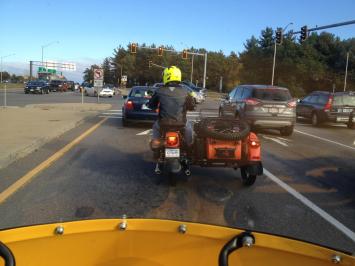 Our plan was to drive around the area to put 500 km’s on the bikes on Tuesday, dropping them back off at the dealer that night so they could be serviced first thing Wednesday morning, then hit the road no later than noon Wednesday.

It was about 1530 by the time we finally left the Ural of New England parking lot.  Our first stop was the nearby Radio Shack so I could buy a cigarette lighter USB plug so I could charge my long dead phone.  That completed, we stopped to top off the tanks and then began our maiden ride.  We didn’t have a planned itinerary or maps but we had talked about heading northeast towards Kennebunkport for the break-in ride.  So we left Boxborough on a road going northeast.

Ted, Dmitry’s lead mechanic, had given us specific guidance on what we could and couldn’t do with the bikes during our break-in period.  We kept the speeds under 50, which was easy to do as there are no straight roads in Massachusetts or New Hampshire, and made frequent stops to give them a little rest.  As we had both expected, the bikes proved to be very simple and comfortable to operate.  Also as expected, a pair Urals, bright orange and bright yellow, attracted a lot of attention.  We received a lot of honks and waves on the road and at each of our road-side stops we attracted people who wanted to learn about the bikes, which always turned an intended 10 minute stop into a 30 minute stop.

We were prepared for the conversation as Irbit MotorWorks of America (http://www.imz-ural.com/) had provided us with Ural Emissary kits, allowing us to easily share information about Urals.  Very few people had heard of Urals before and most were surprised they were new bikes.  We did our best to share the Ural story.

We continued our journey northeast on the back roads of New Hampshire and Maine, eventually arriving in Kennebunkport around 1930 or so.  We found a nice local restaurant known for their lobster rolls and enjoyed a nice meal in this quiet seaside town. By 2030 we were topping off the tanks and following a coastal road southwest.  The weather was perfect and although the temps were a little cool (lower 50’s) the Ural fairings kept us very comfortable in lightweight summer riding gear.

We took the long way back to Boxborough so we would arrive at the shop with 500km’s on the bikes. It was nearly 0230 by the time we arrived – about 24 hours since we had left Moorhead.  We parked the bikes in the open bay garage out back, put our keys in the drop-box and jumped into the rental car for the hotel down the road.  It was well after 0300 by the time we were finally able to lay down for some much needed sleep.  Day 2 would begin in a few short hours as we wanted to be back at the shop by 0800 so we could watch Ted do the break-in maintenance and learn what we could from him.