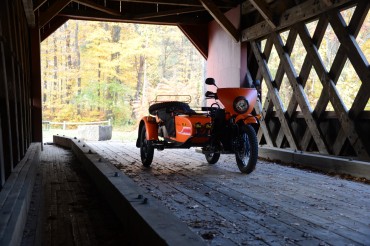 The view from our first stop 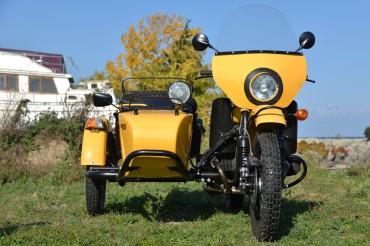 Through the window of the restaurant in Kennebunkport

Waiting for the ferry 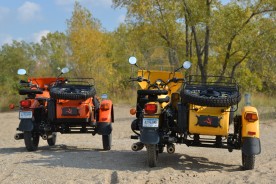 Yesterday we covered more than 500 miles, so we thought it may be possible to do that again today, putting us in Duluth, about 240 miles from home.  Unfortunately, we couldn’t start driving at a decent time because the ferry doesn’t leave until 1015, which gave us several hours to kick back and wait.  We decided not to go for an early morning ride because it was cold and raining and looking at the forecast, we would get plenty of that today.

We went to the ferry terminal at 0830 to ensure we could get on the boat.  With our tickets purchased, we had about an hour to head to the water’s edge to get our Lake Michigan pictures.  We couldn’t get down to the water, but we did find a nice sandy spot to get some photos.  Timing was good as I was able to get some with the ferry in the background entering the harbor.

We arrived back at the ferry terminal with just a few minutes to spare to get the bikes loaded and tied down.  Neither of us particularly enjoyed the choppy ride across Lake Michigan, but it allowed us to avoid the loop around the lake and driving through Chicago, which saved several hours.

With the weather forecast looking like we would be heading into snow, John decided it would be best to update his gear and get some heavier gloves.  Google found us what appeared to be a large cycle shop close to the route in Wisconsin, so that was our first destination after unloading. Our stop there turned out to be an even better bargain than we had realized at the time.  John found some nice, overpriced gloves, but had no choice but to purchase them.  Then we discovered a rack of 50% off clothes and each upgraded our winter, wet weather pants on the cheap…very, very good idea.

We stopped at a local hamburger shop for grub and then pointed the bikes northwest on the back roads of Wisconsin.  At this point getting to Duluth was looking a little iffy, but possible.  We had gotten some rain and the temps were a little cool, but our gear was holding out.  Things went well until about 1800.  It was then we came to a detour that sent us off in the wrong direction and by the time we were to the end of the detour had added nearly 50 miles to the route. If we had been using a GPS (which we left at home) we could have created our own detour, using the Interstate that would have actually shortened our trip…I think the small towns along the detour must have bribed Wisconsin DOT to bring traffic to their towns.

Because of the hour + wasted travel time, the thought of making it to Duluth in the cold, dark, rain was fading fast.  The temps were going to only get colder and there was an 80% chance of snow, so we thought we should be dried out and rested for that portion of the trip.  We looked at options at our gas stop and decided Spooner would be the place to spend the night.  We would arrive before 2200 and it would leave us about 75 miles from Duluth.  With that plan, we figured we would make it home by Noon on Sunday.

The rain had stopped by the time we pulled up to the little run-down mom & pop motel that had vacancy in this little tourist town.  For the price we paid, we should have had a pool and continental breakfast, but the reality is it was an over-priced, rundown little dive that had that familiar old, musty cabin smell.  The room was small, the beds were lumpy, and the shower was disgusting, but what the hell, we would only be here for about 6 hours or so…